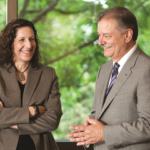 Oregon’s Public Employees Retirement System (PERS) has been plagued by funding deficits estimated recently at more than $20 billion. The burgeoning cost of the benefits has impaired the ability of public employers to fund schools, libraries, and other public services. For more than 20 years, a team of lawyers at Harrang Long Gary Rudnick, led by Bill Gary and Sharon Rudnick, has worked in the legislature and in the courts to help solve those problems.

Today, the Oregon Supreme Court unanimously decided James, et al. v. State of Oregon, upholding the most recent effort to address them with two legislative amendments to the PERS statutes: The first places a cap ($195,000 for 2020) on the amount of a member’s salary that is used to calculate the member’s benefits. The second redirects contributions from the member’s individual account program to a newly-created employee pension stability account to help fund the defined-benefit component of the member’s retirement plan. The effect of that amendment is that some of the benefits a member earns for work performed after July 1, 2020, may be funded by the member’s contributions rather than solely by employer contributions. HLGR represented several local government entities defending the 2019 legislation against a challenge to its constitutionality.

The court based its decision on two conclusions: First, the legislature did not promise in the pre-amendment statutes that the benefits would never be changed in the future for future work that the member had not yet performed. Second, the amendments do not operate retrospectively to decrease the benefits attributable to work the member performed before their effective date. In other words, when members retire, they will receive the benefits that are in effect at the time they did the work. Because the challenged amendments affect only those benefits that members earn in the future for work they choose to perform in the future, the amendments are permissible under the Oregon and US Constitutions.