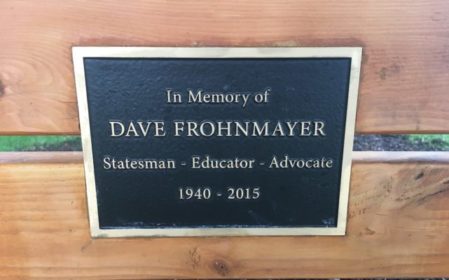 On June 13, 2019, William F. Gary spoke on behalf of the Frohnmayer family at a ceremony dedicating a memorial plaque at the State Capitol grounds in Salem in honor of Dave Frohnmayer. If you were unable to attend the ceremony, Bill’s speaking notes are reprinted below:

On behalf of the entire Frohnmayer family, I extend thanks to everyone from the Department of Justice, the Courts, the legislature and the Marion County Bar Association who worked tirelessly to make this fitting memorial to Dave Frohnmayer a reality.

Marla Rae told me that no remarks honoring our friend and mentor Dave Frohnmayer would be complete if they did not include his two favorite “go to” phrases: “Profoundly” and Beyond Measure.” So, let me check that box at the outset: Dave would be “profoundly” moved by this honor. The thoughtfulness and persistence of those who navigated the bureaucracy to make it happen is “Beyond Measure.”

It is difficult to believe that it has been four years since David left us. I still sometimes expect to see him lumbering into his office in the morning, clearing his throat, and already focused on solving the problems of the day. And yet, I cannot help but think that Dave would be shocked & deeply distressed by the division, the anger and the fear that has become all too endemic in the political affairs of our state, our country and the world.

That is not to say that Dave was naïve about the blood sport that American politics has become; about the daily vilification of those who do not subscribe to every jot and tiddle of a particular political agenda.

But at his core, in the face of overwhelming personal and political challenges, Dave was an incurable optimist. He believed that everyone (or at least almost everyone) was decent and good and their opinion counted at least as much as his own.

And even today, I have no doubt that Dave would assure us that it is still possible, at least in Oregon, to have a government that is as decent as the people that it serves.

In 1988, when he was sworn in to his third term as Attorney General, he said “maybe its old fashioned, but I think It’s not—I think it’s coming back into fashion—to regard public office as a public trust, to think not of the cheap political gains that can be made from being demagogic on one stand or another, but basically to say that over time, if you really care and try to make a difference, that you will, and over time, good government is good politics.”

It was that conviction: the belief that public service is a noble calling and that everyone, be they friend or foe, ally or opponent, is driven by the same basic decency, that inspired so many of us that knew him to try to serve the public good.

If David were with us today, I believe that he would remind us to trust in basic human decency and he would admonish us to find a way to overcome our profound differences and each of us to listen to the other. Really listen. 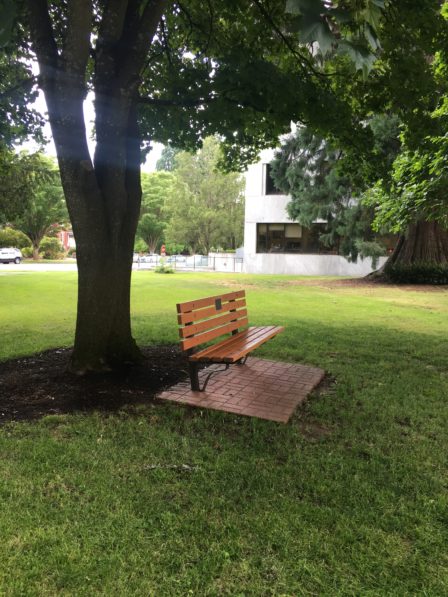 In the coming months and years, as we go about our business in this nerve center of Oregon government, I hope that each of us, from time to time, will pause on this bench, in this beautiful setting, to remind ourselves that good government requires good communication, most especially with those whose views seem to be most fundamentally opposed to our own and to remember that it was the desire to serve the common good that inspired each of us to pursue public service.

If everyone in that Capitol building and in those halls and Chambers of Justice would do that, we would honor the memory of David Frohnmayer “profoundly” and we would improve Oregon government “beyond measure.”